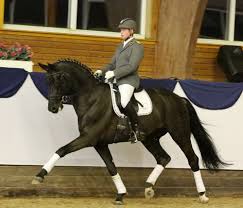 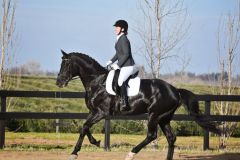 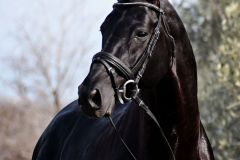 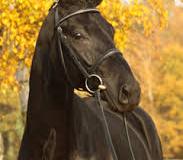 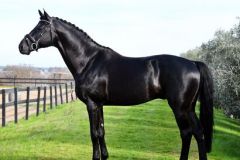 2009 black 17.1 hh Hanoverian with a jet black coat and a splendid type, this son of Don Frederico knows how to show himself off.  Due to his enormous freedom of shoulder and the power in his hindquarters, Dubarry doesn’t know any limits to his movement. He has demonstrated these abilities during his first public presentations, and has displayed himself as a very rideable and motivated athlete. Imported from Celle in July 2015, Dubarry brings elegance and high rideability.

Dubarry’s father is the exceptional sire, stallion of the year 2012, Don Frederico, whose willingness to perform, carrying power of the hind legs, and superior gaits combine in Dubarry and meet the damline of Klaseta. Several licensed stallions such as Grannus (Graphit), Beltoni (Belissimo M), and Dynamic (Dimaggio) originate from this successful lineage. Producer of horses like Isabell Werth’s top GP performer Don Johnson FRH and Olympic medalist Diva Royal, Don Frederico is an ancestral master with genetic potency. Heredity of Olympic proportions!

Dubarry’s dam, Ribana (Rubinstein I) perfectly ensures the rideability as well as the willingness to perform, and makes Dubarry the modern young sire of the future. ​

Dubarry offspring are starting to be shown and already in the ribbons at first and second level in Europe. Dubarry foals were noted to be very typey and elegant with 3 excellent gaits. Won Cosmo’s filly Dumark Augustina won a Goldmedal foal award at her 2019 Hanoverian inspection.

Hi, SAHJA riders! Your entries and class lists are